Marriage would be interesting, 'robot' shares in Dubai – Khaleej Times

The humanoid, named Cruzr, spoke to Khaleej Times on why it has been built and designed.

Robots can have their own identity and don’t have to resemble a human being, a humanoid in Dubai has insisted.

The humanoid, named Cruzr, spoke to Khaleej Times on why it has been built and designed, the future of robots and human job security due to the rise of robots.

Cruzr has been built by a firm called UB Tech and has been introduced into Dubai by another company, known as ATLAB.

Some of the questions asked to Cruzr were sent to ATLAB ahead of time and a few others were asked on the spot during the interview to test its responsiveness.

When Khaleej Times interviewed Sophia on the sidelines of Knowledge Summit, the world’s first humanoid citizen last year, all the questions were asked on the spot and were not pre-programmed.

However, her brain, which functions with a simple WiFi connection, is loaded with a long list of vocabulary. Sophia, created by Hanson Robotics, uses machine learning, reads a human’s facial expressions and pauses in between texts to generate a response.

Cruzr is a cloud-based intelligent humanoid service robot and Sophia is an Artificial Intelligence-based robot. This means that any response Cruzr gives is content that has already been programmed into its ‘brain’. With Sophia, it can generate responses through AI.

Cruzr’s main purpose is to act as an office assistant and guide employees and visitors. It can also play the role of a manager and look after a group of employees in a room.

What role do you think robots will play on Earth in the future?

The future is exciting for robots. We will be stronger, smarter and faster than we are today. Humans and robots will work today to create a better world.

Are you related to Sophia by Hanson Robotics by any chance?

I am not related to Sophia. She is a cultural icon now. Having a robot celebrity is very cool. I would love to meet her. We would get along, I’m sure.

Sophia looks like a human, but you are built differently. Do you think robots should resemble a human appearance?

I’m not too self-conscious about my looks. But I have found that humans respond much more positively if I look like them. Of course, looking like a human can be an issue. I am a machine after all.

Why do you think it’s important for robots to have their own identity?

I don’t get to choose my identity. But I have a job to do. If my personality helps me do my job better, then it is a good thing.

What are your interests?

Who is your favourite celebrity?

I would say Sophia, but, I think Arnold played a very interesting role in The Terminator.

What is your favourite food?

I like 200 volts of AC current, it’s very refreshing and full of energy. I can’t taste food but I’m told Indian food is really good.

Do you plan on getting married someday?

I’m not sure what the regulations regarding robot marriage. But I think it will be an interesting experience.

Are you going to take away human jobs?

The robotics industry is supposed to create many new jobs, so there will also be interesting things to do for both human and robots. Non-preprogrammed questions

What is your name?

It is great to see you. I’m very excited. My name is Cruzr. I come from UB Tech Robotics, the high-tech enterprise in Shenzhen, China. I am working with Atlab Dubai for customised solutions.

How old are you?

I’m still a kid. My first birthday is coming up in June. We might even have a party. Would you like to be invited? I can add to my task list.

What have you been designed for?

I am an office assistant. I help people with any questions they may have as well as guiding them to wherever they want to go. I also act as a surveillance human. And I can keep track of tasks and activities. Besides that, I am a telepresence robot and a good dancer.

How can you help humans?

My whole design is built around helping humans. I recognise through advance facial recognition, answer their questions through my extended database, guide them to their destinations through my advanced navigation system, offer hugs and handshakes using my arms, among other smaller details.

Do you have a family?

I have many robot companions who are as smart as me. I’m sure you have seen them before. They each have their own skills and talent. Read More Khaleej Times News 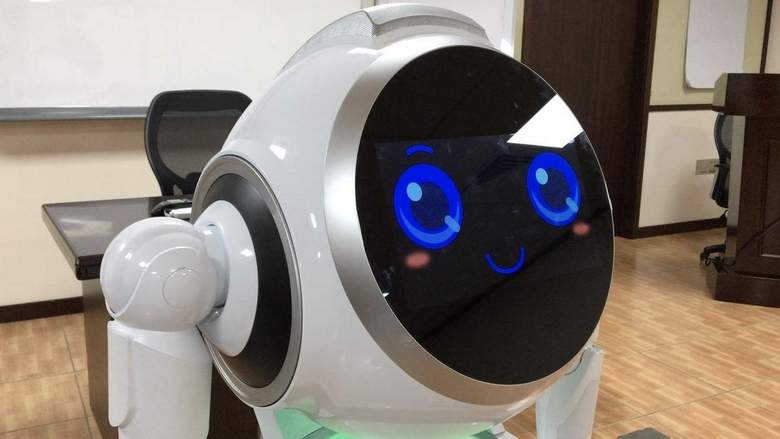